skip to main | skip to sidebar

Ningiu is the Greenlandic word for grandmother, since I'm part Greenlandic and because handicraft reminds me of my grandmother and mother I find the name appropriate.

I had some time of last week, and instead of working on projects already in the works (and collecting dust in the closet), I started a new long overdue one...

Shortly before Christmas my in-laws bought a holiday appartment, and being in the Christmas spirit (or because the punch were spiked) I offered to make a quilt for their new home away from home, an idea they were really thrilled about.
But I must admit my palms got a bit sweatty when my mother in law asked for a king size quilt...
Thankfully she fell in love with a daisy chain quilt pattern, which would come together quite easy. 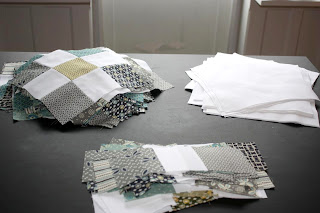 I suggested the blue and grey colortone of hope valley, and the plan was a succes, except for the part of me sewing it... I simply have not had the time before now. 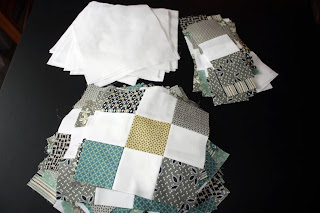 It's made with 9" ninepatches and 9" squares of white kona cotton. 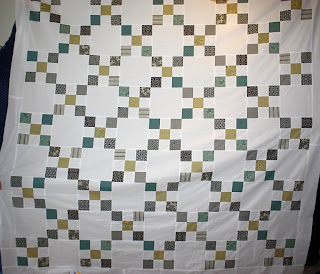 After this picture were taken I added both a checkered border and an extra white border. It ended up being 108", and is by far the biggest quilt I've ever made (and will continue being just that in quite along time...)
I decided to have it longarm quilted, since I couldn't imagine this giant fit in my sewing machine.

I chose this chantilly lace pattern, and really look forward to see the final result.

In the meantime I'll play with the leftover blocks, I'm thinking maybe a matching baby blanket, Marie has said she really wants to spend the night at her grandparrents. (well actually she said: dabadesu...muu, but I'm certain she meant the other...)

I hope you had a great weekend :-)

The combination of colours is really beautiful!! Your in-laws will love it!

Gorgeous - can't wait to see how the quilting turns out!

I love the colors! Can't wait to see the finished quilt.

Wow! That is a monster of a quilt! A beautiful monster, though!!

what a great top, you must be very proud!! and it is huge.. your familiy will love it, i am sure!
claudia.

The combination of colours is really beautiful!
PPC Advertising India

Isa
Copenhagen, Denmark
30+ mom, wife, friend, sister, daughter who's trying to improve her patchwork and quilting skills. I'm always happy to read any comment you may have.

One kind of coasters

Another kind of coasters

This is a Flickr badge showing public photos and videos from Ningiu. Make your own badge here.